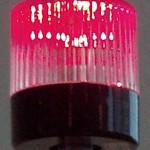 Note: This post is being shared with my other blog, TryingToKeepItAgile, since it pertains to both agile development and XML.

Teams that are practicing continuous integration often have a central information radiator to indicate when the build fails. Several different kinds have been used, such as an Ambient Orb (a translucent globe that can glow in different colors), lava lamps, talking teddy bears, and all sorts of other things. The idea is that when the information radiator indicates that the build is broken, it is everyone's first responsibility to get the build working again, so that problems are not compounded by checking in more changes on top of the code that broke the build.

I was working with a team that was not yet ready for continuous integration, but I had some long-running test streams, where each test job, if successful, would submit the next one. Rather than constantly monitoring the test stream, I wanted to have a light, similar to what continuous integration teams use, that would turn amber when my test stream was running, green if all the tests passed, and red if it failed along the way.

First, I needed a light. I chose a red-green-amber LED from Delcom Products. It comprised the following parts:

The total cost was $117.50. I later replaced the mounting pole base with a Grooming Arm Clamp ($17.05), for a total cost of $125.20. This allowed the light to be clamped to the edge of the desk, whereas the mounting pole base had to be screwed into a block of wood. (In case you are not familiar with grooming arms, they are used in grooming dogs. A grooming arm is a curved pole that clamps to the table, and the dog's leash is hooked to it to keep the dog in place.) Here is a picture of the test light in use: 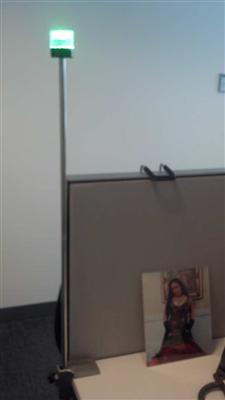 To make things even more interesting, the test jobs were running on an IBM mainframe (z/OS) system, and the light was a USB device that plugged into my desktop computer, so I had to establish communication between the two. I already had a test framework on the mainframe that would monitor the results of each test job. If the results were as expected, it would submit the next job in the sequence; if they were not, it would stop. I modified the framework to update a file, LIGHT.DATA.XML. The first job in the sequence updates it with a status of "running". Any failing job updates it with a status of "failed". If all jobs are successful, the final job updates it with a status of "passed". Here is an example of the file. The <jobname> and <system> elements are there for future expansion. Note that the encoding is specified as "EBCDIC-CP-US", because the IBM mainframe uses the EBCDIC character code, rather than ASCII or UTF-8.

On the PC, there is a Windows batch script, LightDriver.bat, that loops continuously, calling the UpdateLight.bat script, waiting 15 seconds, and repeating the procedure. It looks like this:

The UpdateLight.bat script uses FTP to retrieve the LIGHT.DATA.XML file from the mainframe. FTP translates the file from EBCDIC to ASCII as it is downloading it, but the XML header still says its encoding is EBCDIC-CP-US, so the sed stream editor is used to change the encoding specification to UTF-8.

The encoding is really ASCII, rather then UTF-8, but it is close enough, and it makes subsequent XML processing happier. (By the way, I probably would have been OK if I had just specified UTF-8 in the XML declaration in the EBCDIC file on MVS. But I wanted to allow for the possibility of processing the XML on MVS also, and that would require a valid specification of the EBCDIC encoding.) The modified XML file looks like this:

The program extracts the value of the <status> element, and maps its three values, running, passed, or failed, into corresponding colors, amber, green, or red. If the <status> has an unexpected value, the color is set to dark. The color is then mapped to a parameter for the command-line utility that sets the color of the LED light, 0 for dark, 1 for green, 2 for red, and 4 for amber. The Windows command-line utility that comes with the Delcom light is USBCMDAPx64.exe. The program takes the following parameters, specified in this order:

LSBDATA takes precedence, so specifying 7 for MSBDATA turns off all the pins, and then any pins specified in LSBDATA are turned on. The pins for the various colors are:

It is possible to turn more than one color on at the same time, but it does not look very good. The following commands will set the light to the various colors:

The highlighted parameters are the ones that were set in the XQuery program. The resulting Windows batch script looks like this:

The generated script is then called:

This two-process, generating a dynamic Windows script and then calling it, is necessary because it is not easy to call programs out of an XQuery program. This process worked well, with the LED light on my desk letting me know the status of my test jobs. But when the test stream failed, I really wanted to know which job failed. So I got a BetaBrite Prism scrolling LED sign. (These are sometimes called ticker-tape signs or Times Square signs.) Here are a couple of images of one, from a previous blog post, XML for LEDs:

The BetaBrite Prism connects to the PC via USB. The previous post was about BetaBright Classic signs, which used an RS-232 connection. The method described in that post does not work for the USB signs. Luckily, the folks at Industro Logic have a free command-line program to control BetaBrite Prism signs. You can download it here. The file you want is PRISMCOM.EXE. If you run the program with no parameters, it gives you a help screen that shows you the options, but the basics are that you enclose control information in braces. In our case, we want to specify the color of the message, so the command would like like this:

I modified the UpdateLight.bat script to run another XQuery program that takes the same input XML file and creates a Windows batch script, setsign.bat, that contains the prismcom command to send the message to the BetaBrite sign. As before, the script is then called. Because the XQuery programs use XPath expressions to select the parts of the XML file that they need, I can add new information to the LIGHT.DATA.XML file without breaking anything. For example, I decided I wanted to have the job number, as well as its name, displayed on the sign, so I changed the test framework to add a <jobnum> element to the XML file. Once that was in place, I could update the XQuery program for the sign at my leisure. Since the LightDriver.bat script invokes the UpdateLight.bat script every 15 seconds, it is easy to play with the message on the sign to see what works best. You edit the XQuery program, save it, and within 15 seconds you can see the result. For example, after I added the job number, I had a message that looked like this:

The {hold} tells the sign not to scroll. Instead, it alternates displaying the job name and the job number. I decided that the rest of the message was extraneous. The sign is located right next to the light, so people who are interested in it already know what it means. (It actually would not even need to change color, but having it match the color of the light looks better, and reassures people that the two are in sync.)

But what about color-blind coworkers? Over-reliance on color coding can be a problem for them. Right now, no one using this information radiator has that problem. But should it occur in the future, it can be easily solved by changing to a different kind of light:

This is a Patlite LED stack light. They are available on eBay, frequently for less than $50. (This light has four colors, but you really need only three.) They are not USB devices, but just have wires, one for each color plus a common wire. You will need a 24 VDC power supply, a USB relay board from Numato Labs, and a little bit different programming. (The relay boards looks like a virtual COM port.) With a stack light like this, people can tell what the light is saying by the position of the illuminated, even if they cannot differentiate between the colors.

This method lets the mainframe control the light and the sign without a bunch of TCP programming, or that sort of thing, so it can be set up very quickly. Using an XML file as the communication medium makes it easy to extend: new elements can be added to the XML file, and information radiators that are not interested in them will just ignore them. With proper locking on the mainframe side, the XML file could even convey the status of several test streams, and individual information radiators could decide whether they wanted to report the status of a particular stream or all of them.